admin
In this video I test the latest LHR unlock in T-Rex miner version 0.25.12, which can give up to 80% hashrate unlock on LHR GPUs. I test this new miner to see what hashrates we can get on every kind of LHR GPU, including the RTX 3060 LHR, 3060 Ti LHR, 3070 LHR, 3070 Ti, 3080 LHR and the 3080 Ti. I also compare these hashrate results with the recent version of lolMiner that also had very good results unlocking LHR for mining Ethereum, to see which miner is best for LHR mining Ethereum in 2022. I also compare the two miners in terms of power consumption to see if lolMiner or Trex miner has better efficiency, giving us a better idea of what is the best LHR unlock miner in 2022. Finally, I also try the low power mode, which is a different type of LHR unlock in Trex miner that lowers power consumption and improves mining efficiency. I of course also test this low power mode LHR unlocker on all LHR GPUs (3060, 3060 ti, 3070, 3070 ti, 3080 & 3080 ti). After watching this video I hope you'll know the best LHR unlock hashrate for all LHR GPUs in 2022.

Please like the video if you liked it and subscribe to the channel for more crypto mining videos!

Join the channel to get access to perks:
https://www.youtube.com/channel/UCQzug7Uk2Z9LcvCpYqeJO9g/join 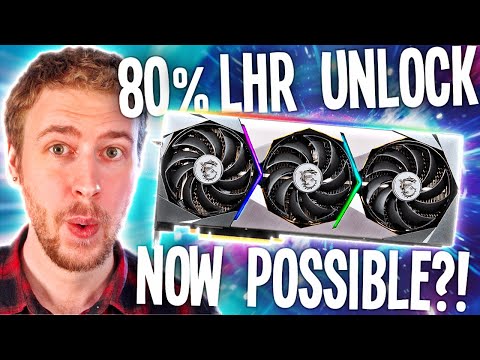 In this video I test the latest LHR unlock in T-Rex miner version 0.25.12, which can give up to 80% hashrate unlock on LHR GPUs. I test this new miner...