In this video we take a look at the first ever Bitcoin mine set up on a volcano in El Salvador.

El Salvador has officially mined the first bitcoin using volcanic energy, its president revealed. President Nayib Bukele shared a screenshot of a mined bitcoin on Twitter, calling it officially the first bitcoin mining the volcanode.
The news follows the Salvadoran president’s announcement earlier this week that the country was taking its “first steps” toward harnessing volcanic energy for bitcoin mining.
Following the approval by El Salvador’s congress for the adoption of bitcoin as legal tender in June, Bukele said he had instructed state-owned geothermal electric company LaGeo to allow bitcoin miners to tap the country’s volcanic resources.
With 20 potentially active volcanoes according to VolcanoDiscovery.com, which account for almost 22% of the country’s energy supply, El Salvador’s harnessing of geothermal energy could provide an answer to the hunt for a reliable clean energy source to power bitcoin mining.

President of El Salvador Announces Volcano-Powered Crypto Mining Operation Has Generated $269 in Bitcoin. That might not sound like a lot, but President Nayib Bukele has pegged his political future to making Bitcoin legal tender.

Weeks ago, El Salvador became the first country in the world to declare Bitcoin a form of legal tender, spending $225 million and increasing its government stockpile to 550 Bitcoins as part of a rollout designed to cement the country as a world leader in cryptocurrency. On Friday, president and right-wing populist Nayib Bukele tweeted that the Bitcoin mining operation run by state-owned energy company LaGeo SA de CV has generated a plum total of $269 in Bitcoin using geothermal power from volcanoes.

Bukele tweeted early Friday morning that the government was still “testing and installing,” but what he called the “#volcanode” was officially operating. That follows on a video the president tweeted earlier this week of government-branded shipping containers carrying ASIC miners to an energy facility in a jungle for installation by LaGeo technicians.

The El Salvadoran government has created its own Bitcoin wallet called Chivo which is available for all citizens with a national ID card to register for, upon which point they will receive 30 bucks’ worth of Bitcoin. That’s a lot, given that the national gross income per capita in El Salvador was estimated to be around $3,600 in 2020.

A sign of the times, we suppose. Many El Salvadorans, however, are extremely skeptical that jumping on the Bitcoin train is actually a wise decision, as it pegs the country’s economy to the cryptocurrency’s wildly fluctuating prices and could make it vulnerable to speculation in the world markets. CNBC previously reported that a Central American University poll showed 70% of respondents in the country did not support making Bitcoin legal tender, with many of those polled having little confidence in Bitcoin itself or saying they have a limited understanding of how to actually use it.

“The government is betting more than $200 million in a virtual casino, and that’s taxpayer money,”

Copyright Disclaimer: Stacking Cash is a web channel intended to provide Stock Market and Bitcoin (cryptocurrency) knowledge through video essays, news and analytical compilations. It is intended primarily for the purpose of encouraging informed discussions, criticism, and review of financial topics and towards such purpose, the programs use short extracts of cinematographic films, news clips, sounds recording, and photographic works. These clips and extracts are of a minimal nature and the use is not intended to interfere in any manner with their commercial exploitation of the competition for work by the owners of the copyright. The use of works is in compliance with the fair dealing exception provided under Sec. 52 of the Copyright Act, and we asset our use of the works under the exception provided for criticism and review. 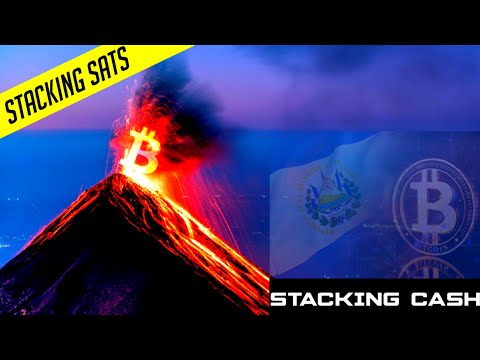 #elsalvadorbitcoin #bitcoinmining #bitcoinmine #elsalvadormine In this video we take a look at the first ever Bitcoin mine set up on a volcano in El S...