Capturing the insights of leading figures from the technology industry, the Blockchain City Documentary is the story of cities around the world and their shift towards being technologically powered through Blockchain. With Interviews from leading governments worldwide that have implemented Blockchain technology, including the Government of Netherlands, Government of Estonia and of course the City of Dubai, the film captures what is shaping our collective tomorrow so that we can all join hands and take the next steps together.

WHAT IS BLOCKCHAIN
The distributed ledger technology invented by an unknown entity under the name of Satoshi Nakamoto has sent more shockwaves around the world than anything else. Blockchain is not about just doing things in a different way, but it completely changes the way things are done, in essence re-creating models for finance, trade, logistics, education, healthcare and more. This documentary film will help viewers understand the impact of Blockchain and capture their definition of the technology & more.

WHY THE FILM - A NOTE BY HOST IAN KHAN
Today we undoubtedly live in one of the fastest changing times humanity has ever seen. The convergence of technologies including the Internet, Internet of Things, Artificial Intelligence, Blockchain and others is redefining our expectations from technology. Blockchain Technology is more than just Bitcoin and the fact remains that as a foundational technology it can disrupt every industry we know. This film catches a glimpse of where Blockchain is making an impact and how it will truly transform our future in more ways than we know.

As a Technology Futurist, Author, Speaker and an industry voice I want to massively simplify the idea behind the implementation of Blockchain and other technologies in Dubai and across the world so that an average person understands the world shaping around them and can take the right action to be part of this new world. Unless we empower the common people, we will never be successful in enabling technology. That's the mission !

Blockchain City has been made possible by the generous support of our partners.

Thank you to CULedger for supporting the project in a big way and helping bring this knowledge to the masses. CU ledger has supported the film as Title sponsor.

We cannot thank everyone who has helped make Blockchain City possible. From every organization that agreed to speak to us to others who facilitated the meetings, contacts and provided us with space, location and other amenities, your help has made it possible for us to bring the film to our audiences.

As we head into post production and launch in October, there are many opportunities to get involved with the project. Please get in touch through the link below.

Thank you for supporting the future !

To Screen Blockchain City at your event, conference or company please contact us at www.BlockchainCityMovie.com

Unauthorised Broadcast is Prohibited. All rights are Reserved by Futuracy Films and this documentary is not under Creative Commons. For usage and rights please contact [email protected]

Thanks for watching ! Please do subscribe to this channel. 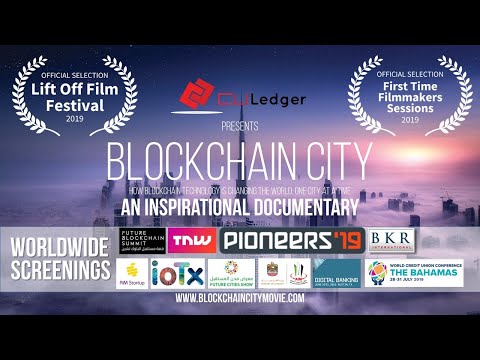 BLOCKCHAIN CITY Capturing the insights of leading figures from the technology industry, the Blockchain City Documentary is the story of cities around ...