Text:
When we were a smaller society you and I could trade pretty easily. But as the distances of our trades grew we ended up having to create institutions. With time these institutions have grown so much that we have stopped being their top priority, they just see us as dollar signs to line their own pockets.
Today we have a technology that allows us to trade one to one again at scale, cutting out these institutions.

It’s a trustless peer-to-peer trading system, that lets you transact without a middle man like a bank or a corporation.

Blockchain is the revolutionary technology behind the planet's future financial system.

This technology will have an even bigger impact on our society than that.

Blockchain is a shorthand for a group of coding technologies. They can be programmed to record and track anything of value. Financial transactions, medical records, or even land titles.

Blockchains stores data in batches called blocks. The blocks are linked together in chronological order to form a continuous line.

Imagine a train getting loaded with information moving one railcar at a time. But pay attention, every load contains the same info, but the chain of information grows each time.

The name Cryptocurrency comes from the use of cryptography.
Because of that, when you make changes to a particular block. You don’t actually change the block, but instead, the change gets stored in a new block. Showing that X changed Y-Block at a particular time and date (Kinda like a book of data)

If this sounds familiar, it's because this is an old solid way of storing data in books. You fill in a new page every time.

As I described with my railcar metaphor. Each new block contains all transactions since the chain's genesis or beginning. Plus any new transactions that took place since the last block generated.

How does a blockchain operate?

A Blockchain is run by thousands of independent computers.
The computers are operated by participating people with a common software or node.

The participants either work for the right to create a block or are selected in a randomized manner. This is based on which consensus mechanism the network uses. I'll be releasing another video that gets into it in more depth.
In short, there are two leading mechanisms of how these networks operate
Proof of Stake and Proof of Work.

Besides the cryptocurrency aspect of blockchain technology, there are many use-cases for it. With time this technology will likely bleed over to every industry because of how reliable it is. From the energy sector to inventory and every aspect of record keeping. Don't be surprised when your medical records and identity will be blockchain-based.

Join my journey as I dive deeper into all things crypto. Let's learn more about this great innovation together. 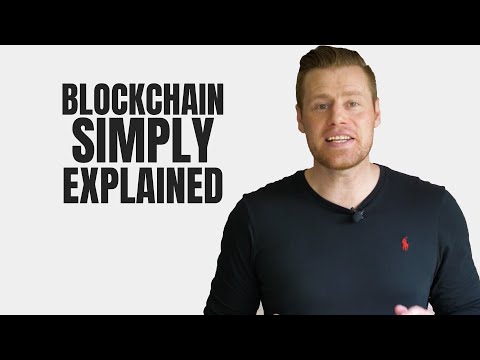 Learn what blockchain really is. Explained in a simple manner. #Blockchain #bitcoin #ethereum #cryptocurrencies Text: When we were a smaller society y...