admin
#newforum #web3 #blockchain #nfts #social3 #team
The NewForum community is elated to present our first team episode featuring Yev Velizhenkov; there aren't enough words to describe Yev and how much we value him at the Newcoin Foundation. The NewForum Hosts tried to do so in four words: intelligent, conscientious, easygoing, and caring.

Yev is the Blockchain Developer at Newcoin Foundation and was previously the Blockchain Lead at Newlife.ai. He has been engineering since he was a teenager. He started with C++ to develop video games for fun. Realizing that the power of writing words could move things around, he was committed to making the best use of his time and skills in service of others. His main interests are philosophy, elegant code, and design thinking.

Yev joined Newlife after a few years of working as a freelancer. While at Newlife, he built the initial Flutter-based mobile app in Dart and fell in love with smart-contract engineering, leveraging multiple protocols towards Inter Blockchain Communication.

NewForum hosts wanted to know what inspired Yev to work at Newcoin Foundation.

"I met Sofiane right before Newcoin Foundation. We started to build the first version of the Newlife mobile application; we connected because we have similar interests and culture..."- Yev

Yev and Sofiane saw an opportunity to leverage Blockchain technology because it has a natural use case for transparency and equal redistribution of resources.

In his full interview, Yev shares how he met Sofiane Delloue, CEO and Co-Founder at Newcoin Foundation, how and why they began to work together, and the crucial role he played in their collaboration right from the start!

Yev expressed that he is generally motivated by the people he works with and honored to be a part of our dynamic and diverse team with shared values; everyone brings something unique. Yev finds this experience magical, and we couldn't agree with him more!

For Yev, passion for his work and the impact he wants to make trumps the monetary gain.
Yev believes that making an impact matters, and although most people start with the best intentions, the tools that may have been neural when created are given power by the users or people who decide to use these neutral tools for "bad or good."

After discussing the pros and cons of Web2, it was very organic for Crypto and Blockchain to come up as they are a crucial part in solving the current issues we face in Web2 culture.

According to Yev, Blockchain technology inspired most people in the world.Yev nicely explains Blockchain Technology in a digestible way, why he finds it fascinating and even gives us a little history class in his interview.

Yev also talked about NFTs in his interview; similar to Blockchain, NFTs are being explored and figured out.

Yev continued to elaborate more about the pros and cons of NFTs and how the Newcoin Foundation is working strategically to bring more meaning to this genius technology.

Yev hopes to naturally follow the steam of curiosity he has and expressed that at the moment, it is telling him to dig more into the Blockchain side of things as well as cryptography.

"I think that Blockchain technology can have a great use case; transparency of voting and decision making. It will be nice for more companies and platforms to adopt this technology..."- Yev

Yev is not sure if the whole internet will move to Blockchain. He finds it a speculative topic, but in regards to Web3, he truly believes in another approach where people will self-host their services in peer-to-peer networks.

"Where people will own their hardware and they can deploy their website or their content on this hardware that is running at their home. I think that's through ownership...."-Yev

Watch Yev's full interview and hear the story about how he met the CEO and Co-Founder at Newcoin Foundation- Sofiane Delloue, his role as a Blockchain Lead at the Foundation, and why his excitement for Web3, Blockchain Technology and NFTs!


✨Learn More about Newcoin Foundation!✨
https://newcoin.org/
.
.
.
.
.
DISCLAIMER: The information in this video is the opinion of the speaker(s) only and is for informational and entertainment purposes only. You should not construe it as financial, or legal advice, and it does not represent any entity's opinion but those of the speaker(s). For financial or legal advice, please seek a duly licensed professional. 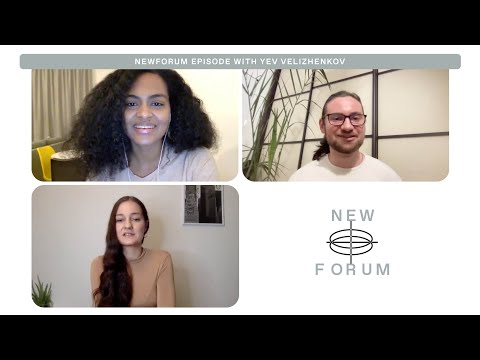