admin
#newforum #web3 #social3 #creatoreconomy #nfts #blockchain #artist #metaverse #digitalart
Loucas Braconnier, known as Figure31, joined us on this episode of NewForum. Figure31 functions as Loucas digital persona. He is an incredibly rare, hard-working, and persistent artist who invests hours upon hours improving his craft, and it shows in his artworks. His friends in the Web3 space use the word genius when describing Figure31, and our community agrees! Read on, watch his full interview, and you will understand why!

Figure31 studied photography, then moved on to cinema and media studies. He finally ended up with a BA in Visual Arts and Media. The visual and conceptual body of work presented by Figure31 questions the ever-evolving relationship between reality and technology, supported by different computer-generated images, photographs, sculptures, tests, and virtual spaces. All artworks are first created on-chain and are available for anyone with an internet connection.

So how did this Crytpo, Web3, Blockchain journey begin for Figure 31?

Figure31 explained that when he finished his studies at the university, the pandemic began, and everything he was working on got canceled; he couldn't go to the gallery or any artist centers or even the museum. Nothing made sense except to transition to digital art. He shares that this was a tough decision for him at first, but he got into it, and it's what he is doing now.

"I used to create large-scale installations with sand and some big print; my artwork pretty much filled up the entire space as much as possible. When you are working digitally, it's like right now the way we consume artwork is mostly on a desktop or iPhone-it's a simple interface, and it's a very different relationship to an artwork..."-Figure31

Figure31 says what he finds interesting is the number of images we produce due to the nature of social media and the nature of our work. Technology is used excessively in our daily lives, and he wonders how this changes us as humans and the way we interpret the rest of the world.

"These days, we tend to make the difference between the real space and the digital space; that's something I hear a lot from other traders in the space. We say IRL (In Real Life), but in real life now is digital also because we spend so much time on our screens, and the space that the screen fills and the time we spend on, is probably equivalent to the time
and the space we use and the world we live in right now..."- Figure31

Figure31 suggests that NFTs ( on-chain-art, blockchain art)- will be crucial in defining the balance between artwork existing in the real world; making it transferable not only from a digital standpoint but a physical standpoint is going to be important in the future.

According to Figure31, Blockchain technology is a medium, and different artists will use it differently to achieve different results.

"That's the way I approach it-there are some artists who are more into entertainment, others simply interested in illustration, and that's all fine. It's like a giant space with different people with different intentions, and it's really up to the artist to decide what they want to do with it and live up to their standards, standards of art history, or not at all. They can be doing cartoonish things, and to me, it doesn't step on the space in which I evolve on the Blockchain..."-Figure31

Figure31 believes that the future of Blockchain technology is only going to empower artists and creators even further. However, it's not an easy prediction to make; figuring out how the structure of this digital workspace or art space or art market will look, but the idea of traceability and more collaboration is promising.

Join our community to watch his full interview today! Hear a stimulating discussion between Figure31 and NewForum Hosts about the ever-evolving relationship between reality and technology, how it impacts Figure31's work and artists, and how Blockchain technology is transforming the creator economy!

✨Learn More about Newcoin Foundation!✨
https://newcoin.org/
.
.
.
.
.
.
DISCLAIMER: The information in this video is the opinion of the speaker(s) only and is for informational and entertainment purposes only. You should not construe it as financial, or legal advice, and it does not represent any entity's opinion but those of the speaker(s). For financial or legal advice, please seek a duly licensed professional. 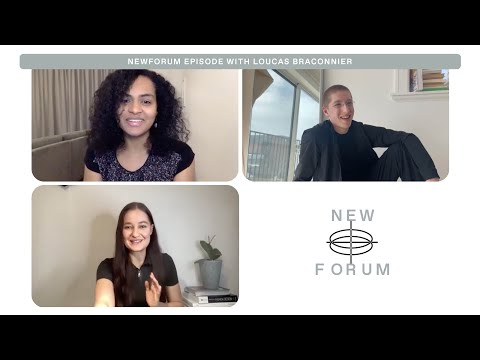