admin
Welcome to The Daily Forkast, March 3rd, 2022, presented by Angie Lau. For the latest in blockchain & crypto news. On today's show:

00:44 - Crypto donations continue to flood in for Ukraine
01:16 - South Korea’s Gopax freezes Russian accounts
02:28 - Could Ukraine be on the agenda at China’s “Two Sessions”?
04:33 - Demand for blockchain education soars in India

---
According to blockchain analysis firm Elliptic, donations continue to pour into Ukraine to the tune of nearly US$47 million since the beginning of the Russian invasion, and crypto exchange blockchain showed that Ukraine government wallets for crypto donations have so far collected over US$10 million in Bitcoin and around US$15.3 million worth in Ethereum. Meanwhile, a South Korean crypto exchange has made a move to freeze the accounts of Russian users. According to local media, Gopax has frozen around 20 accounts, with the exchange saying that the action aligns with the U.S. Office of Foreign Assets Control and the European Union's sanctions against Russia. 20 may not seem like many, however. That's because many Korean exchanges have already restricted access to foreign investors over money laundering concerns. Meanwhile, Hong Kong based Animoca Brands is also among Asian firms to stop serving Russian users. However, not all exchanges share the sentiment. Binance and Kraken have both said they will not freeze user accounts as they go against the philosophy of decentralized and distributed access of crypto.

The Two Sessions will see Chinese Premier Li Keqiang deliver a work report to the National People's Congress, reviewing last year's performance and setting new policy directives for 2022. And at the same time, the National Committee of the Chinese People's Political Consultative Conference, which is an advisory body consisting of industry leaders and party delegates, holds its annual meeting. The digital yuan is expected to be high on the agenda following its showcase to a global audience of athletes and diplomats at the Winter Olympics last month. Amnon Samid's of cybersecurity company Bitmint, which has led CBDC trials for China since 2018, told Forkast he expects greater financial support for smaller players to be announced and that making the E-CNY programmable could make it the perfect tool to support small enterprises. Meanwhile, Russia's invasion of Ukraine has led to greater publicity for China's central bank digital currency, with one expert saying it could partially shield the country from the financial restraints Russia is facing, which include the widening ban on access to the SWIFT network for Russian banks. Shanghai based fintech consultant Richard Turrin told Forkast he expects a carefully worded statement that recognizes the strategy of building a currency that is immune from global interference without referencing the conflicts. Turrin says he expects a greater urgency to launch the E-CNY domestically, as well as newfound importance in its international use as a result of the sanctions. Other items to look up for are more details on China's blockchain goals, which could include development of smart contracts, while David Roche of the Independent Strategy expects regulation of the Metaverse, digital finance and cryptocurrency sectors to be maintained, but possibly with less active intervention.

And finally, today making a career in blockchain, that's what we're seeing in India, where demand for tailor-made blockchain courses is soaring. An entire generation is shifting focus to this technology, and many are starting to wonder if India could become the new blockchain Silicon Valley. While the Indian government still hasn't committed to clarity over the legality of cryptocurrencies as a whole, the Reserve Bank of India has been tasked with introducing a central bank digital currency. That means blockchain professionals are becoming valuable resources in both the public and private sectors, and that's led to an explosion in the number of courses in the subject being offered by India's leading educational institutions. The Indian Institute of Technology in Kharagpur is just one of them, offering a free 12-week online course on blockchain. And it's clearly popular with almost 28,000 students enrolled. Over 11,000 blockchain related jobs are currently being advertised on LinkedIn in India, while local job portal Naukri.com currently shows over 110,000 blockchain related job listings. And it's not just those already in school or university who are looking to develop their blockchain knowledge. Traditional investors who are worried about getting left behind are enrolling to. However, while such courses may bring students up to speed. 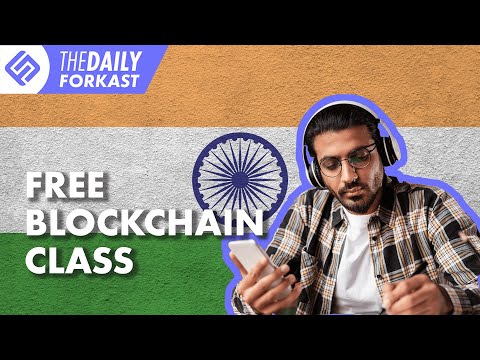