ETHEREUM IS ABOUT TO TAKE OVER

admin
Today we're going to be discussing the differences between Bitcoin and Ethereum, go over the new changes, and how each has performed as an investment - Enjoy! Add me on Instagram: GPStephan

GET YOUR FREE STOCK WORTH UP TO $1000 ON PUBLIC & SEE MY STOCK TRADES - USE CODE GRAHAM: http://www.public.com/graham

The YouTube Creator Academy:
Learn EXACTLY how to get your first 1000 subscribers on YouTube, rank videos on the front page of searches, grow your following, and turn that into another income source: https://the-real-estate-agent-academy.teachable.com/p/the-youtube-creator-academy/?product_id=1010756&coupon_code=100OFF - $100 OFF WITH CODE 100OFF

The concept of Ethereum was first described in 2013 by then 19-year-old Vitalik Buterin, who created it as a way to facilitate programmable contracts using its own currency. Ethereum is built on the same BLOCKCHAIN network of Bitcoin, except - it allows for an open source platform where programmers could build applications that facilitate the exchange of money, content, property, or anything of value - in the form of what’s called a “smart contract.”

This is a digital agreement that performs a specific task when certain conditions are met…like, if you smash the like button - the like button will turn blue. It basically removes the middle man, and allows tasks to happen in real time without any human involvement. SO, in THIS CASE…Ethereum is just the network programs are created on, and ETHER is the currency that powers it…kind of like, Ethereum is the car - but Ether is the gas that powers the car.

But, in terms of “THE FLIPPENING” - to me, based on past performance - it’s a legitimate topic that should be taken seriously.

This also plays into the topic of what’s called “Bitcoin Dominance,” which measures Bitcoin’s market cap, relative to the rest of of the cryptocurrency industry….or, in other words: how much of the entire market cap belongs to Bitcoin? The general thought is that - if bitcoin rises…so does almost every other cryptocurrency, alongside with it…and, the opposite happens if Bitcoin falls…while everything else begins selling off.

In this case, Bitcoin dominance has been steadily falling since 2017 after other options, like Ethereum, Cardano, and a multitude of others have begun taking some of its place…and, throughout the last 5 years…Ethereum is beginning to catch up, having previously reached 2/3rds the market cap of Bitcoin in 2018.

BusinessInsider just recently quoted a 24-Year-Old Cryptocurrency Hedge Fund Manager as saying that "Bitcoin is a store of value, it's digital gold. And so its market cap, at most, is going to be somewhere around gold - maybe larger, because it has some properties that are better than gold. But that's roughly the benchmark you're going to use to cap its market size,"

On the other hand, “the versatility of the ethereum network would be the key attraction for developers and investors alike. Ethereum is trying to power the rails of all of global finance in the future, and that is a much bigger market, if it does succeed.”

As for my take on things…I think the Flippening has merit, although Bitcoin and Ethereum are fundamentally different and shouldn’t be seen as competitors.

For business or one-on-one real estate investing/real estate agent consulting inquiries, you can reach me at [email protected]

*Some of the links and other products that appear on this video are from companies which Graham Stephan will earn an affiliate commission or referral bonus. Graham Stephan is part of an affiliate network and receives compensation for sending traffic to partner sites. The content in this video is accurate as of the posting date. Some of the offers mentioned may no longer be available. This is not investment advice. Public Offer valid for U.S. residents 18+ and subject to account approval. There may be other fees associated with trading. See Public.com/disclosures/

ETHEREUM IS ABOUT TO TAKE OVER 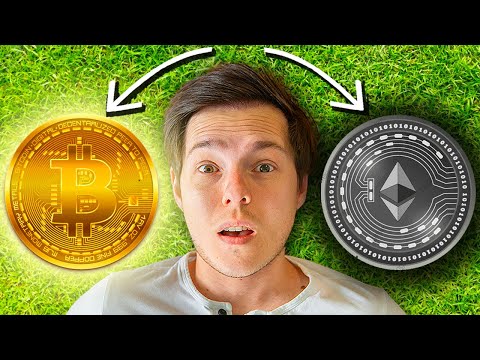 Today we're going to be discussing the differences between Bitcoin and Ethereum, go over the new changes, and how each has performed as an investment ...