admin
In the past few years, Blockchain has become one of the most talked-about things in the world of cryptocurrency and tech. In this video, we will talk about what Blockchain is, how it works on a basic level, what problems it solves, and how it can be used.

As the name suggests, a blockchain is a system of information. This approach was originally proposed in 1991 by a group of researchers. At first, it was used mainly to time-stamp digital documents and to create proofs that could not be backdated or manipulated. It went unused until Satoshi Nakamoto applied it in 2009 to create a digital cryptocurrency called Bitcoin.

Blockchain is an open ledger that can be found anywhere, but the ledger has a few traits that make it valuable. Once some data has been uploaded to a blockchain, it is impossible to change it. Which begs the question: how does that work? Let's look more closely at a block. In it, there's some data, the hash of the block, and the hash of the previous block. Depending on the type of Blockchain, different data will be stored within each block. Bitcoin's Blockchain, for example, stores transaction details such as the sender-receiver and the number of coins. Within a block, there is a hash that is paired with a fingerprint. A hash identifies and addresses data blocks, just like a fingerprint does with a person. As soon as a data block is created, its hash is calculated. When you change something inside a block, the hash changes, too, that's why hash values are often used to check for changes in blocks. If a block's fingerprint changes, it is no longer the same block. The third element inside each block is the hash of the previous block. This chain of blocks is what makes a blockchain so secure.

The third element inside each block is the hash of the previous block, and it chains together the blocks. With this security system, blockchain transactions are proven to be irreversible. For instance, let's take an example. The Blockchain is a distributed, digital ledger. Every time you make a transaction, that information is publicly recorded and saved as a block. The block that follows chronologically after it stores the hash of the block before it. The third-row points to the second row, the second row points to the first row, and the first row is a little different. The first block, called the Genesis block, cannot point to other blocks because it is the first one. Now, let's say that you tampered with the second block. This would also change the hash of the block.

Consequently, that makes block three and any subsequent blocks invalid because they no longer store a valid hash of the previous block. Therefore, modifying a single block would render all following blocks invalid. Hashes alone, however, do not sufficiently protect against tampering.


Before we go any further with this video, I'll give you some time to subscribe to the channel and give this video a thumbs up if you like it so far. Also, we'd love to hear your feedback once you have finished watching this.

Disclaimer: All videos on this channel are for entertainment and educational purposes only. We are not financial advisers, nor are we giving financial advice. All our videos are strictly our opinion based on speculation. Always do your own research and consult with a licensed professional before making any investment.

RIGHT Copyright Infringe: The Copyright Laws of the United States recognizes a "fair use" of copyrighted content. - Section 107 of the US. Copyright Act states: "Notwithstanding the provisions of sections 106 and 106A, the fair use of a copyrighted work, including such use by reproduction in copies or phonorecords or by any other means specified by that section, for purposes such as criticism, comment, news reporting, teaching (including multiple copies for classroom use), scholarship, or research, is not an infringement of copyright." This video and our YouTube channel, in general, may contain particular copyrighted materials that were not explicitly authorized to be used by the copyright holder(s), but which we believe in good faith are protected by federal law and the fair use doctrine for one or more of the reasons noted above. 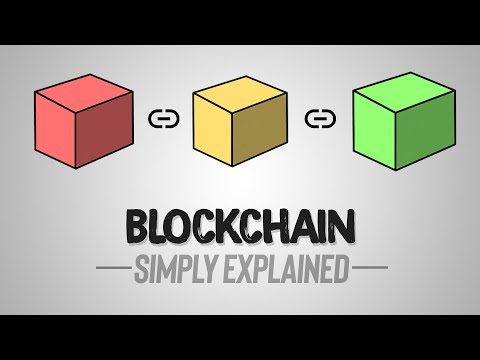 In the past few years, Blockchain has become one of the most talked-about things in the world of cryptocurrency and tech. In this video, we will talk ...