How Does Cryptocurrency Work? Blockchain Explained for Beginners

admin
Almost all money in the world is already digital, entries in a ledger which is usually managed by a bank. Only a small portion exists as physical, such as cash or coins. Given that we already have a mostly digital monetary system and are increasingly immersed in a computer-based world, true peer-to-peer digital money appears to be the next logical step.

Most cryptocurrencies work on a foundational concept known as the blockchain. Public blockchains serve as a repository for information that anyone can add to, no one can change, and no single person or entity can control. Instead of a single company or individual being in charge, responsibility is decentralized, spread out to everyone on the network. Blocks in traditional cryptocurrencies contain records of valid transactions that have occurred on the network.

Blockchain technology also has many exciting uses and possibilities beyond cryptocurrency. Blockchains are being used in medical research to improve the accuracy of healthcare records, to streamline supply chains, and to enhance many other applications.

New blocks are regularly added to the chain of previously stored data, approximately every ten minutes in the case of Bitcoin, through a process figuratively called "mining". Cryptocurrency miners are simply individuals with powerful computers competing against one another to solve complex mathematical equations which verify the ledger's transactions. This process is called "proof of work."

Another significant verification mechanism is called "proof of stake." Instead of requiring people to use a large amount of resources to solve complex equations in order to verify transactions, the proof of stake model employs a network of "validators" who contribute or "stake" their own crypto in exchange for the chance to validate new transactions and update the blockchain, earning a reward.

In late 2008, a mysterious person or group going by the name Satoshi Nakamoto published a whitepaper online explaining the principles behind a new type of digital currency known as Bitcoin. Fundamentally, cryptocurrencies enable peer-to-peer money transfers without the use of an intermediary. There are many more potential advantages as well. For one, the blockchain reduces risk, fraud and corruption. Because the blockchain ledger is distributed across the network's computers, which are constantly verifying its accuracy there is no central vault, entity, or database that can be hacked, stolen, or manipulated.

Let's not forget that banks have fairly strict working hours and are closed at least one or two days a week, whereas cryptocurrency transactions can be made anytime. Cryptocurrency also has the powerful potential to serve the "unbanked". A vast portion of the world's population has limited or no access to banking systems. Cryptocurrencies could solve this problem by spreading digital commerce around the world, allowing anyone with a mobile phone to make and receive payments. Many more people have access to mobile phones than to bank accounts. In fact, more people own cellphones than toilets, worldwide.

Related to this, cryptocurrency transactions can transcend borders quickly and efficiently. Sending money internationally via traditional banking channels can be costly, time-consuming, and complex. Further, instant cross-border transactions allow charitable organizations to place funds quickly where needed, avoiding red tape. Another significant potential benefit is the elimination of excessive money-printing, which can result in rapid inflation.

For instance, when a country such as Iran or Venezuela prints too much money, the value of its currency plummets, inflation soars and people become unable to afford basic goods and services. By contrast, most cryptocurrencies have only a limited number of coins. When all of those coins are in circulation, it's really hard for a central entity or company behind the blockchain to simply create more coins to add to the supply. This leads to deflation, or a more valuable asset over time. The potential positive and transformative uses of cryptocurrency and the blockchain are breathtaking.

But there is also concern about potential downsides, such as extreme energy use and environmental effects, which we'll examine further.

How Does Cryptocurrency Work? Blockchain Explained for Beginners 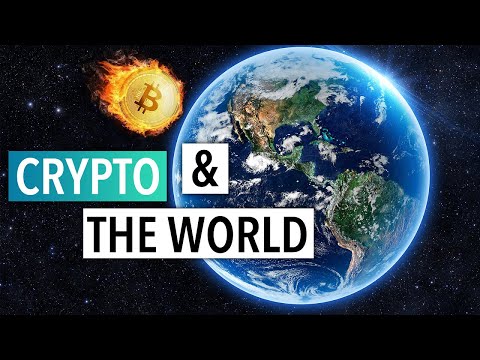 Almost all money in the world is already digital, entries in a ledger which is usually managed by a bank. Only a small portion exists as physical, suc...