How does Cryptocurrency work?

admin
Crypto, cryptocurrency like Bitcoin, Ethereum, Yield Farming NFT's, Dogecoin,, Shiba Inu, Love Potion, Axie Infinity, all explained in one Video!
At its core, cryptocurrency is typically decentralized digital money designed to be used over the internet. Bitcoin, which launched in 2008, was the first cryptocurrency, and it remains by far the biggest, most influential, and best-known. In the decade since, Bitcoin and other cryptocurrencies like Ethereum have grown as digital alternatives to money issued by governments.
The most popular cryptocurrencies, by market capitalization, are Bitcoin, Ethereum, Bitcoin Cash and Litecoin. Other well-known cryptocurrencies include Tezos, EOS, and ZCash. Some are similar to Bitcoin. Others are based on different technologies, or have new features that allow them to do more than transfer value.

Crypto makes it possible to transfer value online without the need for a middleman like a bank or payment processor, allowing value to transfer globally, near-instantly, 24/7, for low fees.

Cryptocurrencies are usually not issued or controlled by any government or other central authority. They’re managed by peer-to-peer networks of computers running free, open-source software. Generally, anyone who wants to participate is able to.

If a bank or government isn’t involved, how is crypto secure? It’s secure because all transactions are vetted by a technology called a blockchain.

A cryptocurrency blockchain is similar to a bank’s balance sheet or ledger. Each currency has its own blockchain, which is an ongoing, constantly re-verified record of every single transaction ever made using that currency.

Unlike a bank’s ledger, a crypto blockchain is distributed across participants of the digital currency’s entire network

No company, country, or third party is in control of it; and anyone can participate. A blockchain is a breakthrough technology only recently made possible through decades of computer science and mathematical innovations.

How does Cryptocurrency work? 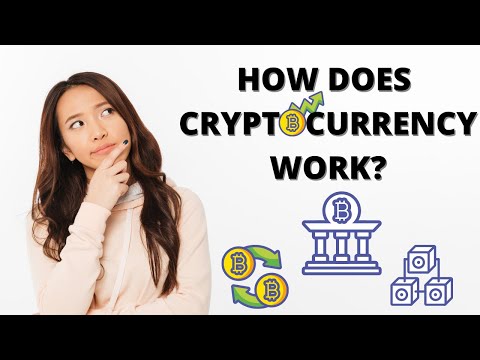