I now have 6 S19J pro ASIC miners in my farm. Let’s take a look at how that’s going.

LOOKING TO BUY and S19J Pro?
Email [email protected] and tell him you heard from me, or come to my discord server where you can talk to musk miners directly! https://discord.gg/JG2NQ7DUzd

I bought each of these in pairs and each pair is a different model and speed. I’ve got two 95TH, a couple 100TH and a pair of 104TH machines. Not only that, but I’m experimenting with a beta of the asic.to overclock on all of them to varying degrees, but here’s what they’re doing. Also - were in a dip right now, so its a good moment to gather some more sobering data about what Im estimating is the low side of the ever swinging profit that is bitcoin mining.

All together, and this won’t even be the same tomorrow, Bitcoin dropped 5% just a day ago, who knows where it’ll be a week from now, or three months from now.. but RIGHT now these six machines are earning about $160 a day.. That’s $4800 a month- or on average $800 per machine, a month. A $60,000 salary… This is, of course, after our little dip the last couple days - these same machines were producing closer to $180 a day just last week - and honestly I expect it will be again in January.

Each machine is also burning through about 72kwh of electricity daily, to the tune of 7 or 8 bucks - although, my mine is split between the warehouse, which is on .11 cents per kWh and the SheShed which I think is only at 8 cents per kWh AND we’ve got a roof full of solar producing 8000 or so watts as long as the sun is shining - so figuring out the actual profitability of an upcoming month for me, is a bit of a guess. But I pay SOMETHING like 1300 a month in electricity bills for these machines when you combine both locations, so if the numbers dont change for 30 days, and they will, at this moment the S19’s are profiting 3500 US dollars worth of Bitcoin per month.

Ive also got three L3+’s and 5 RTX 3080 GPUs running in this mine - but this video is about S19’s Specifically so Ive peeled out their electricity and profits for this calculation.

I know people spend a lot of time and energy thinking about when your hardware, or nodes, or stakes or whatever - how long it will take for these things to pay themselves off. And people make spreadsheets, and precise calculations, taking into account the price of electricity and filter changes and number of cups of coffee necessary to do the installation and upkeep. And that’s a fine thing to do, I don’t want this next part to sound like I think you shouldn’t be doing that.

But, in reality - you cant even get CLOSE to knowing when your investments are going to “ROI” (Look I know people are using that term wrong, but it’s pretty cemented in at this point and just let it happen, who cares.)

You can calculate the amount of time it will take for your S19J Pro to churn out $12,000 ALL DAY and you’ll wake up tomorrow and hear that Ford and Walmart decided to accept it as currency and suddenly the price jumps $15 grand and now your calculation is wrong by 4 months. Or imagine the margin of error for the people working this out in March of 2021 (was it march?), whatever they got out their translucent green visors and figured out to the day what percentage of a $69 thousand dollar bitcoin they would need to hash free in order to be at zero and then… bitcoin didnt see the wet floor sign at the top of a mayan ruin on a vacation with its family and fell half way down those stairs)

Instead, I like to think of it more as purchasing a salary.. Sadly, with mining, an ever shrinking salary, too. I can spend a hundred grand and buy basically a 6 figure income! Or in my case, I can use someone else’s money to buy myself that income and then make payments on that borrowed money with the new income I bought. What could possibly go wrong!? /S

Bitcoin mining is a constant hashrate race - and therefor more computing power is added the the entire network every single day. That means that each machine on the network will make a little less money, all the time, forever. At the same time, though, the price of bitcoin on a long scale, has only ever gone up. And again, on a long timeline that has always made this a profitable venture..
Of course these forces of network difficulty and price are not on a balanced scale and its hard to guess which one will win out. There are overclocks coming out for the S19J Pro from both Braiins.com and asic.to which means however fast I can get these machines under an immersion cooling system, I can basically turn 6 miners into the equivalent of 9 miners!! But… So can everyone else, so just as fast as I catch up to the new difficulty, it may speed up in tandem. 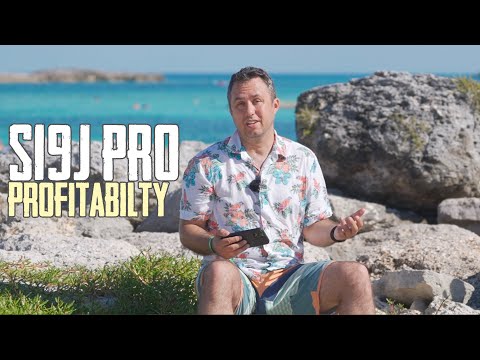 Profitability of an S19 J Pro ASIC Bitmain Antminer Bitcoin farm. I now have 6 S19J pro ASIC miners in my farm. Let’s take a look at how that’s going....