admin
This week on #CGPulse, we hear the latest news on Meta’s decision to shut down Diem, global blockchain industry updates, and BSV Global Blockchain Convention in Dubai.

After more than two years since its launched, Meta announced it is shutting down its stablecoin project, Diem. Meta’s decision came after it became clear that it won’t get the green light from federal regulators. Meta sold assets to digital currency-focused bank, Silvergate for $200 million. Meanwhile, Block CEO Jack Dorsey criticized Meta for the failed project.

Around the world, China carries out its pilot test of blockchain technology application with 15 city governments and more than 100 other entities. The trial aims to utilize blockchain in facilitating data sharing. In India, the government plans to launch the country’s central bank digital currency on April 1. India will impose a 30% tax on digital assets income. Meanwhile, Thailand changes its plan and removed the 15% digital currency tax. The Bank of Thailand and its finance ministry will issue regulatory guidelines on digital currency.

BSV Global Blockchain Convention will kick-off in Dubai. The convention will take place from May 24 to 26 at the Grand Hyatt Hotel, Dubai. It will gather industry leaders, developers, and enthusiasts during the 3-day event. Attendees can expect product launches and panel discussions on blockchain and other emerging technologies on #BSV.

Subscribe to the CoinGeek channel to watch more CoinGeek videos on Bitcoin and blockchain. https://www.youtube.com/coingeek

Interested in learning about Bitcoin and blockchain? Read our Bitcoin for Beginners section here: https://coingeek.com/bitcoin101/

If you have a Bitcoin SV Project idea, we’d like to know about it. Submit your Bitcoin investment idea so we can launch your business right away! https://coingeek.com/bitcoin-ventures/

Be part of the next CoinGeek Conference. https://coingeekconference.com/ 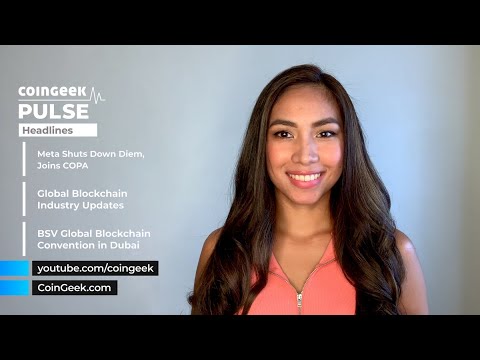 This week on #CGPulse, we hear the latest news on Meta’s decision to shut down Diem, global blockchain industry updates, and BSV Global Blockchain Con...