Pi Network price prediction: What is the future of PI coin?

By Nicole Willing and Georgy Istigechev


What is Pi Network?

Pi Network is a digital currency project that aims to keep cryptocurrency mining accessible, as the centralisation of first-generation currencies like Bitcoin (BTC) has put mining them beyond the reach of many everyday users.

The Pi Network, developed by a team of Stanford University graduates, enables users to mine PI cryptocurrency coins using desktop and mobile phone apps, validating transactions on a distributed record.

Unlike nodes on networks such as Bitcoin that use proof-of-work (PoW) protocols, Pi nodes use an algorithm based on the Stellar Consensus Protocol (SCP). Pi Nodes validate transactions on a distributed ledger and reach a consensus on the order of new transactions that the ledger records.

Under SCP, Pi nodes form security circles, or groups, of three to five trusted people known to each of the network’s users. Security circles build a global trust network that prevents fraudulent transactions, as transactions can only be validated on the shared ledger if the trusted nodes approve them.

The PI mining app acts as a cryptocurrency wallet, linked to a user’s mobile phone number or Facebook account. As with other public blockchains, the Pi blockchain will allow external wallets to hold PI coins and submit transactions directly to the blockchain. However, unlike other blockchains, its developers have not yet released its source code.

With branding based on the mathematical constant π, Phase 1 of the project launched on Pi Day, 14 March 2019, with a free PI mining app. By June, the network had more than 100,000 active users. A year later, when Phase 2 launched, there were more than 3.5 million users.

The app started running advertisements in May 2020 to provide a source of financing for the project. 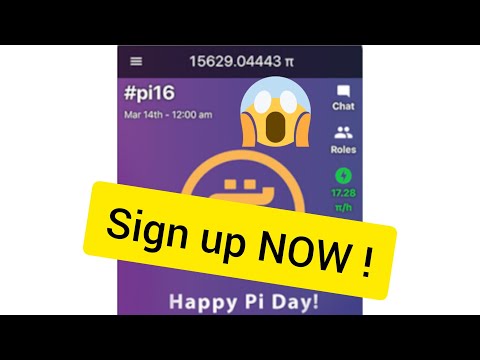