admin
The Bitmain Antminer L3+ is built to do just one thing… Mine crypto currencies using the Scrypt mining algorithm. This miner will dig up a wide variety of coins using Scrypt, currently the most profitable being merge mining Litecoin and Dogecoin.

We’ll start with the money. When measuring in USD, and this will only be true RIGHT NOW because both the difficulty of the network as well as the price of the coins are constantly changing, but right now, after paying for electricity, one of these machines will earn between $5 and $6 dollars a day - equivalent in cryptocurrency, about 150 bucks a month.

There is an enormous supply of used Antminer L3’s on the market as a result of China shutting down a huge portion of their operations. The regular outlets that look like this in your house and garage will send 120 volts of power into whatever you plug into them. There are typically three exceptions; the plug for your drier, your water heater and the one for your stove, those run at 240 volts, but they will look obviously different and you wont have a plug that fits in them.

If youre in a commercial setting, you will likely have three phase power at 120 and 208 volts.

Luckily, you dont have to know ANYTHING about all of that because the L3+ and L3++ run reliably on 120, 208 OR 240 volts! This is true of most computer power supplies as well; and sometimes people use those to power these machines.

A typical plug in your house runs at 120 volts and that means there are a total of 1,800 watts you can run on it before you pop the breaker. Your L3+ will use between 6 and 8 amps, which equates to 800 to 1000 watts depending on the model, so theres quite a bit of extra head room on that outlet.

When you get into 208 or 240 volt circuits, say if you either live in europe or you’ve had an electrician come put in a dedicated line for your mine - your L3+ will use the same number of watts, but half the number of AMPS. Amps are an important thing to consider when it comes to your breaker panel. So if your electrician tells you you’ve got a 30amp breaker with a 240 volt circuit, your L3+ will only use about 4amps; go buy some more!

One of the realities of running an L3+ is that youre GOING to end up buying more L3+’s, one of the easiest ways to power a bunch of them is with one of these PDU’s. A power distribution unit.

The plug end that powers your miner is called a C13, you’ll recognize it as being the end of basically everything that plugs into monitors or printers or the PSU from your desktop PC.

These PDUs will have a whole row of sockets for a C13-C14 power cable, very cheap on amazon, Ill link them in the description, so you can plug in a single PDU to the wall, and from there you can power a bunch of ASIC miners. I also power my bigger S19j Pros this way because each one requires two power cables. They each share a PDU with only one L3 because the S19J Pro needs about 20 amps just for itself.

The L3’s operating temperature is between 0-40c, or 32 to 104° degrees F. If you were to leave even just a single one of these in a room and shut the door, itll heat up that room pretty quickly and just turn itself off. They do have a safety feature to not overheat.

They dont require air conditioned air, just rapidly moving air, and recycling that same air is generally a bad idea. You’ll want to ventilate to the outside which also means bringing outside air INSIDE. I have seen some people piping the hot air directly into their HVAC system as a closed loop, which is clever! But the noise will follow the heat in there so be ready for that.

At my setup, I have a big industrial fan built into an exterior door of my warehouse in this small dedicated room designed to replace the entire volume of air in there with cool filtered air, every 6 seconds or so! Then at the front of the warehouse, two very large doors are cracked just enough from the floor to allow that same amount of air to replace it. you might even call it the perfect setup.

If you can solve for heat and noise, and have some unused circuits at whatever place you want to run these machines, then you’ve found an excellent source of passive income. LiteCoin has been around almost as long as bitcoin and it doesnt appear to be going away any time soon. Dogecoin is maybe a little more suspect, but there are several other coins that use the Scrypt Algorithm and these miners that were first released in 2017 look to continue to have a few years left of profitability. 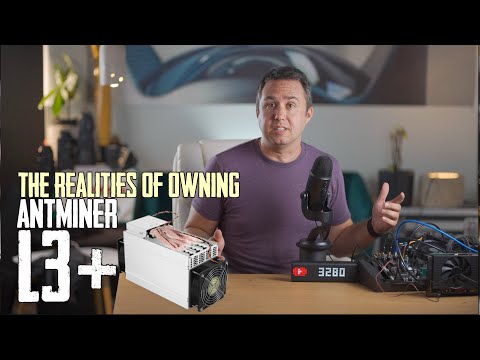 The Bitmain Antminer L3+ is built to do just one thing… Mine crypto currencies using the Scrypt mining algorithm. This miner will dig up a wide variet...