Tencent And Ant Group Have Rebranded NFTs as "Digital Collectibles"

admin
Welcome to The Daily Forkast, November 1st, 2021, presented by Angie Lau. For the latest in blockchain & crypto news. On today's show:

First up, Hong Kong-based venture capital firm CMCC Global aims to gather US$300 million worth of investments in its latest crypto fund, with patronage from Hong Kong billionaire Richard Li and Gemini co-founders the Winklevoss twins, CMCC plans to allot its new fund into DeFi and NFTs.

Meanwhile, over in China, the September 24th ban on crypto mining and trading continues to bite, with another local government cracking down. Ganzhou, a prefecture-level city in the eastern province of Jiangxi, says its economic development zone is working with authorities on carrying out inspections at a local industrial park. The authorities say warning letters have been issued to companies in the area, with businesses and licenses being inspected.

Staying in China with growing criticism from state media over NFT hype. Three of China's best known tech giants have jointly issued what they are calling a self-disciplinary industry convention. Ant Group, JD Technology and Tencent Cloud all have pledged to resist the hype and are rebranding NFT projects as digital collectibles. According to a statement released by Ant Group's blockchain arm AntChain, the trio issued a convention relating to what they call digital, cultural and creative works, pledging not to get involved in cryptocurrency and saying they will work to prevent speculation and risks of money laundering. And Guofei Jiang, vice president of Ant Group, said in a statement that digital collectibles on AntChain are packed with the real value of quality, cultural, intellectual property and artworks, and that a company resists any form of malicious hype. AntChain confirmed the rebranding of NFTs as digital collectibles in a tweet last week, and Huanhe, an NFT app that Tencent, launched in August, has also removed references to NFTs from the app. While NFTs were not included in China's recent stepped-up ban on crypto-related activities, both the Securities Times, which is sister paper of the People's Daily and the Chinese government aligned Guangming Daily, have recently published opinion pieces criticizing hype over NFTs.

Meanwhile, last week we brought you the news of Squid Game cryptocurrency, a parody token based on the hit Netflix series from South Korea. Well, its price has continued to skyrocket, according to CoinMarketCap. It's soared more than 50,000% in just four days. Be that as it may, the token remains under scrutiny as users claim they cannot sell it, and there are a lot more questions over infringement of Netflix's intellectual property. It was trading at US$7 on Friday — now, it's at US$38. The power meme coin that sprung out of Netflix Squid Game is the talk of the global crypto space, but with growing suspicion. PancakeSwap, the tokens only market, has warned investors of multiple reports of users being unable to sell the Squid Coin. And one Twitter user called the project "100% rugpull", a term where the owner of a crypto project gathers investments, then abandons the project. Others take issue with the possible infringement of Netflix intellectual property, with no official license from Netflix to be found, nor can any affiliation with the drama's makers be identified.

Meanwhile, FWENCLUB, a platform for collectibles under Hong Kong-based creative studio AllRightsReserved, recently released a line of Squid Game toys, which are officially licensed from Netflix. Its creators acknowledge that the hit TV series resulted in many fake products both in and out of the crypto space. However, they have a plan to combat fakes using blockchain technology. FWENCLUB will soon launch an app where buyers can scan a physical NFT tag to verify authenticity of their purchases. Securing creative rights may be harder in this nascent world of crypto and NFTs. However, the key to ensuring authenticity may lie in that self same Blockchain technology.

Word On The Block: https://youtube.com/playlist?list=PLENVHIZFjdMT-q2_LSNncbuoS_LGiuLz2

Tencent And Ant Group Have Rebranded NFTs as "Digital Collectibles" 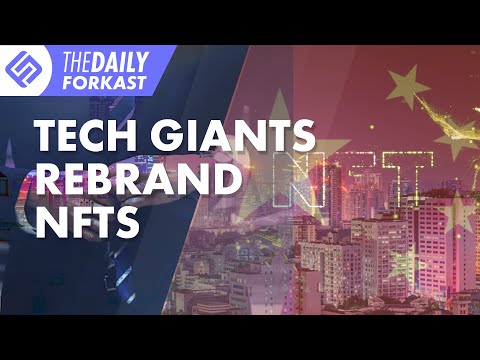