admin
Let's tour the biggest Bitcoin and cryptocurrency SOLAR MINING FARM that is completely DIY'd and owned by ONE crypto miner!! Subscribe to VoskCoin for more exciting cryptocurrency videos - http://voskco.in/Sub

Learn how we are using Crypto Earn to buy, sell, and stake popular cryptocurrencies like Bitcoin, Ethereum, Tezos, Chainlink, ADA, and CRO along with the FREE $50 code here - https://voskcointalk.com/t/get-50-in-cryptocurrency-just-for-signing-up-with-crypto-com/577

Check out the ORIGINAL CrazyDane Bitcoin and cryptocurrency solar mining farm video tour here, where Peter was mining over $300 dollars a day!!!! https://www.youtube.com/watch?v=V2fhHdeN_5E

Using solar panels to generate electricity is the most exciting and environmentally friendly way to mine Bitcoin, Ethereum, and any other cryptocurrencies. Peter aka CrazyDane has been building out MASSIVE solar panel arrays for mining cryptocurrency! Peter has created these solar mining plans all himself, he sets up the solar panels and runs all of the associated wiring and electrical work and then he even builds his own custom cryptocurrency mining rigs. Peter has been GPU mining crypto with solar power for years now, and he is mining very profitability here in 2020, and with an electric cost of ZERO when the sun is up, he will be mining profitably in 2021, 2022, and well forever basically! Let's review his solar powered mining farm and how what he learned in the process, because Peter shares an immense amount of knowledge on how to setup your own solar panels for residential use or industrial style mining as well as his experience mining cryptocurrency long-term! 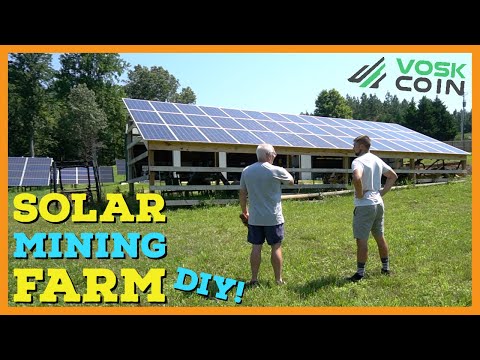 Let's tour the biggest Bitcoin and cryptocurrency SOLAR MINING FARM that is completely DIY'd and owned by ONE crypto miner!! Subscribe to VoskCoin for...