admin
I am SO EXCITED we closed on a 100 acre property to build a solar powered Bitcoin and crypto mining farm and also our new home to live there and manage the miners!
Subscribe to VoskCoin on YouTube - http://voskco.in/Sub

The key to financial freedom is multiple streams of income and passive income is what has always interested me the most. I became obsessed with bitcoin mining, ethereum mining, and just crypto mining in 2017 because you were able to take hardware and turn it into income producing machines that mine 24/7 and basically start earning you cryptocurrencies and thus money while you sleep. Once you pay off a mining rig, and pay the electric bill it's essentially a money printing machine. Solar power is a way to generate electricity endlessly yourself and instead of making electric companies rich, you pay off the solar panel investment and then you have a green Bitcoin mining farm making you green -- money and coins! VoskCoin just bought a 100 acre lot with no HOA so we can build a massive solar powered Bitcoin mining farm that will also mine other cryptocurrencies. The entire process will be planned, documented, and shared right here on the VoskCoin YouTube channel so please subscribe and join us on this CRAZY crypto journey!

VoskCoin is for entertainment purposes only and is never intended to be financial investment advice. VoskCoin owns or has owned cryptocurrency and associated hardware. VoskCoin may receive donations or sponsorships in association with certain content creation. VoskCoin may receive compensation when affiliate/referral links are used. VoskCoin is home of the Doge Dad, VoskCoin is not your Dad, and thus VoskCoin is never liable for any decisions you make.
#Cryptocurrency #Bitcoin #VoskCoin #solar #solarpower #btc #mining #drewvosk #ethereum #gpumining #asicmining #bitcoinmining #miningfarm #crypto #doge 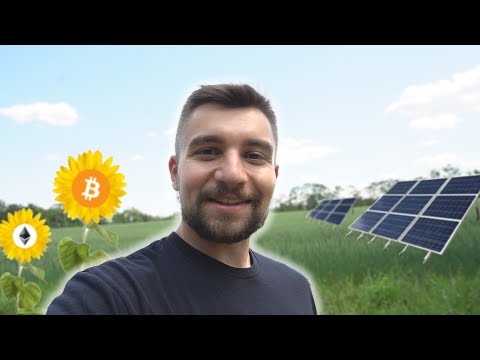 I am SO EXCITED we closed on a 100 acre property to build a solar powered Bitcoin and crypto mining farm and also our new home to live there and manag...