Saylor, a business intelligence expert, explained why he believes cryptocurrencies can be an important asset as governments become more inclined to print money and cause inflation as a
more subtle alternative to raising taxes or cutting spending.

Now, the question is, how do I send 37 horses to you? And then how do we keep the books balanced? So you have to send me back money. Money is socioeconomic energy, he continued. It is-- money is monetary energy, or its the energy, the backhaul energy that we use to trade with. If I can send you 10 bushels of corn and you can send me money equal to 10 bushels of corn, then we can trade with each other.

Saylor explained that the contemporary world settled on paper and precious metal currencies after prior legal tenders were either exploited or found to be flawed.

He gave the example of an African country using glass beads as currency, which could have then been taken advantage of by a European country with the capacity to manufacture glass beads and essentially hyperinflate the African currency.

It turns out that its a lot easier to print money than it is to tax people. And so its either inflation or taxation, Saylor said. Throughout the history of the world, from Roman emperors before, every single coining system – every monetary system ever established – collapsed because of inflation.

Saylor added Bitcoin cuts out the human inclination to corrupt systems like currency by creating an essentially blind bank that routinely updates a ledger with bitcoins or other cryptocurrencies in it.

I can print the money, right? Look at Venezuela, look at Zimbabwe, they can print the money. You can give someone a trillion-dollar note. But that doesn't create more stuff, right? You're just creating paper. So, ultimately, that inflation, it works only to an extent if you can export it, he
said.

So money is essential to civilization. The problem is inflation. And why does it happen? It's a natural human condition, Saylor argued. Because as you have an authority that controls the money, the temptation to inflate the money supply is omnipresent and inescapable. And every civilization has suffered from it at one point in time.

What is Bitcoin? Well, Bitcoin is the world's first engineered monetary system…  Using those two technologies, they conceptualized the idea of an immutable ledger, if you will, a bank in cyberspace. We want to put our money there. And we don't trust each other, Saylor pointed out. We don't
trust the government. We don't trust any corporation. We don't even trust any one computer. So we create a program that keeps track of a ledger, 21 million coins or shares in the bank divisible by 100 million called-- down to a satoshi, so 2.1 quadrillion satoshis. 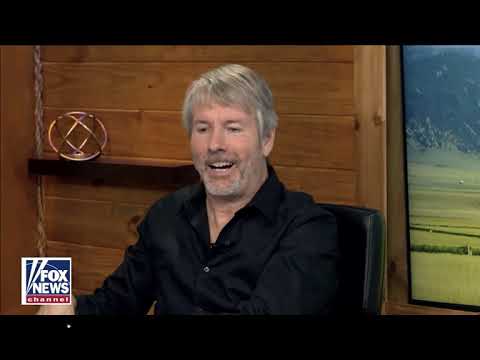