What Vitalik Just Said About His FEAR For Ethereum

admin
What Vitalik Just Said About His FEAR For Ethereum

Ethereum has struggled to stay above $2,000 since the market crash. It is currently down 13% in the past 7 days, trading for $2,040 at the time of writing. Ethereum’s much-expected upgrade looks as if it will once again be delayed and its co-founder, Vitalik Buterin, took Twitter to openly share his contradicting thoughts on Ethereum, Web3, Financial Systems, and Cryptocurrency as a whole.

Viitalik started off with his tweetstorm with;

“Thread: some still open contradictions in my thoughts and my values, that I have been thinking about but still don't feel like I've fully resolved.”

Contradiction between my desire to see Ethereum become a more Bitcoin-like system emphasizing long-term stability and stability, including culturally, and my realization that getting there requires quite a lot of active coordinated short-term change.

Each tweet in the thread started off with the same theme of ‘contradiction between’, which some readers suggested in the replies, is a struggle between his head and his heart. While we won’t read off all 10 contractions…you can check out the link in the description for that.. we will highlight a few interesting points he made.

Contradiction between my love for things like decentralization and democracy, and my realization that in practice I agree with intellectual elites more than "the people" on many (though definitely far from all) specific policy issues.

His contradiction here caused quite a stir in the replies. Some believe that this is a red flag for Ethereum, while others wanted more clarity on his thoughts, specifically, on which policies he agrees with the intellectual elites on, as opposed to the people. Some commenters called him a ‘commie’, which might be a bit extreme conclusion for this tweet, but there’s some level of Vitalik’s belief system that believes there should be a centralized entity.
▬▬▬▬▬▬▬▬▬▬
TWITTER THREAD FOR INTERESTED READERS
https://twitter.com/VitalikButerin/status/1526378787855736832
▬▬▬▬▬▬▬▬▬▬

What Vitalik Just Said About His FEAR For Ethereum 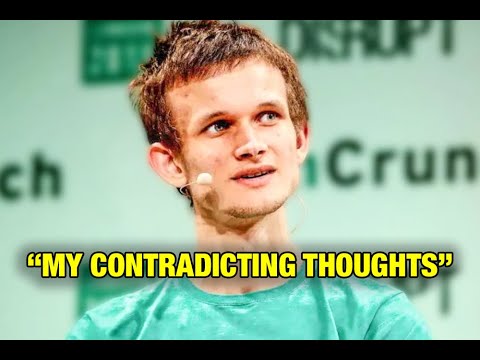 What Vitalik Just Said About His FEAR For Ethereum Ethereum has struggled to stay above $2,000 since the market crash. It is currently down 13% in the...